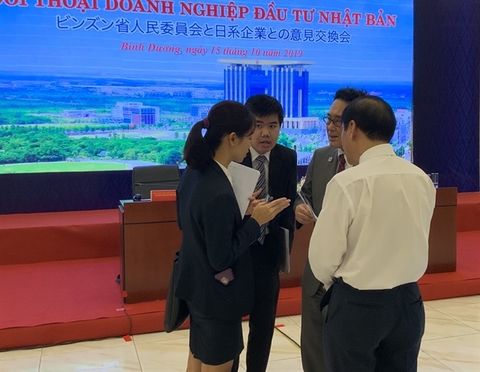 articipants on the sidelines of a meeting between Binh Duong Province agencies and Japanese companies on Tuesday.

More welfare policies are needed to attract workers to the southern province of Binh Duong and persuade them to stay, a meeting between province authorities and Japanese business executives working locally heard on Tuesday.

Both sides agreed that many workers are currently moving out of the province to other places.

“The province now has 29 industrial and economic zones. It will increase to 34 in the coming time and many investors will surely come to the province. So, how can we meet the demand for human resources?

“We need to have more welfare policies to attract more human resources like building houses for workers.”

The issue is not really a new one and has been discussed at many meetings between local authorities and companies.

Deputy director of the local Department of Labour, Invalids and Social Affairs, Tran Van Tuyen, admitted the province faced a shortage of workers.

“The department is making efforts to work with relevant sectors to connect with neighbouring provinces to attract more human resources from those areas.”

The department was ready to collaborate with companies to provide training to local workers, he said.

But he stressed that companies too should have their own policies and welfare measures to attract workers and keep them.

At the meeting, department officials explained to companies how to obtain work permits for foreign workers.

According to Hideyuki Okada, chairman of the Japanese Chamber of Commerce and Industry in HCM City, meetings with local authorities play an important role in helping companies resolve their difficulties and strengthening their trust in the authorities.

The meetings are a regular activity organised by the province People’s Committee to listen to problems that investors face and help resolve them.

Phu Huu Minh, deputy director of the province’s Department of Planning and Investment, said the focus was on attracting investments from large companies with deep pockets.

“Along with developing traditional markets, we pay attention to attracting investors from new markets.”

The province is looking to attract investment in high-tech and environment-friendly projects and those in supporting industries.

In the first nine months of this year it attracted US$2.56 billion worth of foreign direct investment, an 83 per cent year-on-year increase.

Japan remains the largest investor with 304 projects worth $5.65 billion, or 16.2 per cent of total FDI.

Japanese companies have mostly invested in urban development, trade and services and the electrical components, auto, steel, and supporting industries.