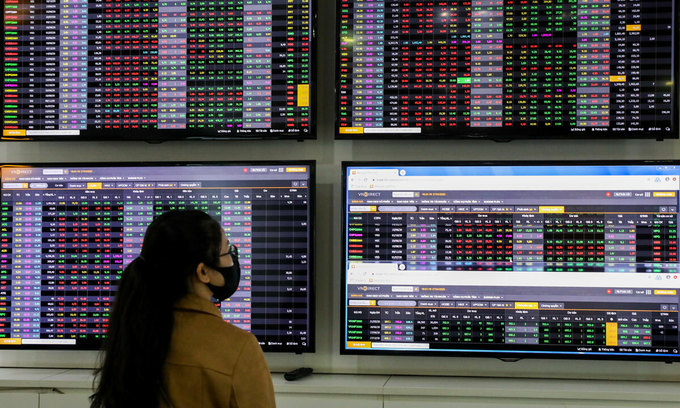 An investor looks at stock prices on the screens at a brokerage in Ho Chi Minh City. Photo by VnExpress/Quynh Tran.

Tuesday proved another fairly balanced session on the Ho Chi Minh Stock Exchange (HoSE), on which the VN-Index is based, with 198 stocks losing and 190 gaining.

Total transaction volume surged nearly 30 percent over the previous session, to VND6.83 trillion ($293.57 million), of which nearly half were attributed to stocks on the VN30, a basket of the market’s 30 biggest capped tickers.

Collectively, these three tickers contributed to a drop in the VN-Index of 2.25 points according to data from brokerage VNDIRECT, while the index itself had only moved downwards by 3.08 points this session.

On the VN30, shares of Vietnam’s three biggest state-owned lender by assets, BID of BIDV dropped the most at 1.5 percent, followed by CTG of VietinBank, down 0.9, while VCB of Vietcombank rose 0.6 percent.

Other major losing stocks this session included STB of private Sacombank, down 1.3 percent, NVL of real estate developer Novaland and SAB of major brewer Sabeco, both down 1.2 percent, and EIB of private Eximbank, down 1.1 percent.

In the opposite direction, CTD of construction giant Coteccons surged 6.9 percent, hitting its ceiling price for the second session in a row.

Coteccons had just announced the resignation of Nguyen Sy Cong and Nguyen Tat Thang, two of its top executives, on Monday, saying they will be replaced with personnel from Kustocem and The8th, two Singapore-based construction investors, who own 18.23 percent and 10.42 percent of the Vietnamese construction giant, respectively.

Next were SSI of brokerage Saigon Securities Inc., up 5.9 percent, ROS of real estate developer FLC Faros, up 2.6 percent, and SBT of agricultural giant TTC Sugar, up 1.4 percent.

The higher capped gainers on the VN30 this session included FPT of IT services firm FPT, up 1.2 percent, GAS of energy giant PetroVietnam Gas, up 1.1 percent, VNM of diary giant Vinamilk, with 0.5 percent.

Meanwhile, HNX-Index for stocks on Hanoi Stock Exchange, home to mid and small caps, shed 0.08 percent, and UPCoM-Index for stocks on Unlisted Public Companies Market fell 0.07 percent. Foreign investors continued to be net sellers to the tune of VND140 billion ($6.07 million) on all three bourses, with buying pressure mostly on VNM of Vinamilk, and BID of BIDV.