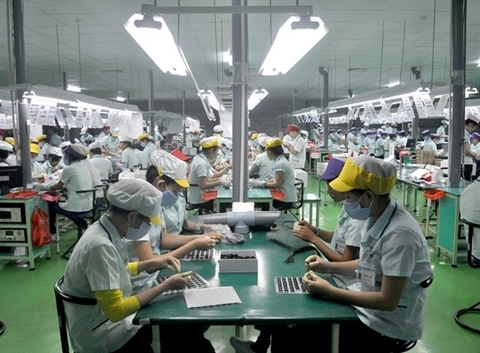 Samsung Electronics’ four subsidiaries in Viet Nam reported total revenue of US$31.8 billion in the first half of the year, an increase of about $500 million over the same period last year.

However, they together reported after-tax profit fell by 40 per cent year-on-year, from $3.2 billion to $1.9 billion, reported the news site cafef.vn.

Of the $1.3 billion decline in profits, Samsung Bac Ninh plant contributed more than half.

The revenue of these two companies decreased by a total of $2.5 billion over the same period but has been offset by Samsung Thai Nguyen.

Currently, Samsung tends to concentrate production in factories in Thai Nguyen instead of Bac Ninh. The turnover of $7.8 billion in the second quarter is also a record for Samsung Thai Nguyen.

Samsung Display is a company that makes phone screens for not only Samsung but also for Apple. Meanwhile, Samsung Bac Ninh and Samsung Thai Nguyen are two of the key phone manufacturing factories of Samsung Electronics.

The fact that both Samsung and Apple launched their flagship phones in the third quarter can help boost Samsung sales and profits globally as well as factories in Viet Nam in the last two quarters.

Recently, Samsung SDS, specialising in IT and logistics solutions, has spent more than VND1 trillion ($42.92 million) to purchase 30 per cent of CMC Group’s shares. Samsung SDS and CMC Group will work together to comprehensively cooperate in all areas of their strengths.