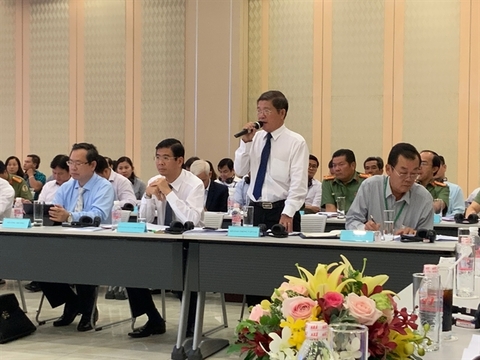 An official from the Binh Duong Province Department of Transportation answers investors at a regular meeting between them and province authorities.

A shortage of skilled workers is among the biggest problems they face, South Korean companies told authorities in the southern province of Binh Duong.

At a meeting organised by the province People’s Committee on Tuesday, executives from many Korean companies expressed worries about it.

One said his company had been looking in many places for workers in vain. The shortage was not only in the textile and garment sector but also in other sectors, he said.

Another complained about a shortage of Korean interpreters.

An official from the province Department of Labour, Invalids and Social Affairs said not only Binh Duong but also other provinces in the neighbourhood faced a human resource shortage.

Binh Duong is now tying up with provinces in the Central Highlands to foster human resources there, he said.

To improve the workforce’s skills, he said companies should tie up with vocational centres and directly invest in the training themselves.

They should take in students as interns to improve their skills, he said.

His department was ready to help connect companies and training institutions, he added.

Other issues related to doing business in the province were also discussed like infrastructure development, banking procedures, regulations on mergers and acquisitions, land acquisition, the development of Di An town, and railway development.

Local authorities regularly meet with investors to understand their problems and resolve them to improve the investment environment.

People’s Committee chairman Tran Thanh Liem promised the executives at the meeting that the province would strive to improve the investment environment and make things more convenient for investors.

“The province will focus on upgrading infrastructure including transportation and water and power supply. The province also plans to expand industrial zones to provide more land to investors.

South Korea has for long been one of the key investors in the province.

According to the Department of Planning and Investment, in the first half of this year Korean investors brought in nearly US$89 million.

Nguyen Thanh Truc, the director of the department said in the first half of this year overall FDI rose 70 per cent year-on-year to $1.45 billion.