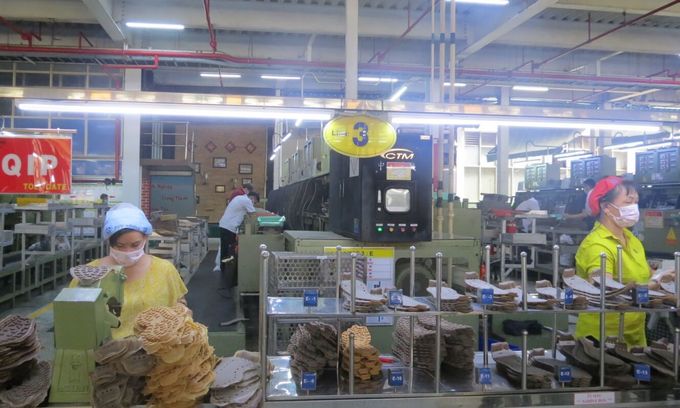 Many industries, especially labor-intensive ones like textile and garment and leather, are likely to face a labor shortage when they resume post-Covid-19.

A survey done in 300 companies in early September found that only about 40 percent of their workers wanted to return to work when the city reopened on Oct. 1.

Many even planned to return after Lunar New Year in early February next year, the survey by the Ho Chi Minh City Union of Business Associations (HUBA) found.

According to the Ho Chi Minh City Department of Labor, Invalids and Social Affairs, more than half a million migrant workers left the city for their hometowns after the city eased lockdowns.

Before the pandemic, the city had nearly four million laborers at more than 286,000 businesses, including 320,000 in export processing zones, industrial parks and one high-tech park.

The en mass departure has left labor-intensive industries like garment, footwear and leather and commercial services bereft of workers.

It has exacerbated a situation caused by garment and textile workers moving to other industries in recent years, leaving the sector with a shortage of at least 10 percent, Nguyen Thi Thuy, vice president of the Vietnam Textile and Apparel Union, said.

The shortage has increased to 30 percent from Oct. 1 as workers left the city, stayed at home to look after children since schools are closed or tested positive for Covid-19 or are in quarantine.

Thuy hoped the industry would be able to hire workers from now since many service businesses are still closed and would not be competing for labor.

However, when the economy fully recovers, it is going to be difficult for the textile industry to attract workers.

At the beginning of 2020, when the pandemic broke out in Khanh Hoa, a textile factory belonging to the Vietnam National Textile and Garment Group in Nha Trang found it easy to hire workers since tourism, hospitality and food businesses had closed, Thuy pointed out.

There are also workers want to return to work to HCMC but cannot. Before the fourth wave of Covid began early last year, Pouyuen Vietnam Co., Ltd in Binh Tan District had more than 56,000 employees.

When the company reopened on Oct. 6 after nearly three months of closure, it gradually planned to return to full production after starting at 30 percent.

But 16,000 workers are unable to return to the city from provinces like Long An, Tien Giang, Ben Tre, and Tay Ninh since they have not reached consensus on allowing people to travel, Cu Phat Nghiep, chairman of the company’s labor union, said.

The slow pace of resumption is not helping the situation either, he suggested.

“If the factory does not increase capacity soon, workers will not be able to waitand have to find other jobs”.

Even before the outbreak began, Pouyuen had a shortage of more than 3,000 workers.

It is one of more than 2,000 businesses with more than 1.5 million workers that make leather shoes and bags, Phan Thi Thanh Xuan, vice president of the Vietnam Leather, Footwear and Handbag Association, said.

When Covid broke out, more than 90 percent of factories had to suspend production for three months as lockdowns were mandated, and workers returned to their hometowns.

Now, with the pandemic gradually being controlled and localities reopening, enterprises are still only allowed to resume on a moderate scale of 20-30 percent, and so the risk of not getting back workers is serious.

“Enterprises will have a labor shortage of around 30 percent if production fully resumes,” Xuan said, adding the slower the reopening is, the more stressful the situation would become.

The labor shortage will also occur at many businesses that did not try to retain employees during the pandemic.

Companies that employed a few hundred workers without labor contracts and did not pay social insurance would have difficulty resuming production, Thuy of HUBA said.

But foreign-owned enterprises would not have this problem since they have excellent HR policies that foster employee loyalty, he added.

After the city announced it would gradually reopen, Manh planned to sell takeaway food, but the plan failed because 70 percent of his employees had returned to their hometowns and most are not vaccinated.

The General Statistics Office said labor shortage is no longer a threat but has already disrupted supply chains.

Its survey of 22,000 businesses found nearly 18 percent requiring workers. The shortage is worst in the southeastern region where 30.6 percent face a labor shortage.

The industries affected most are leather and related products in which 52 percent of companies have a shortage, apparel (49 percent), electrical equipment (44 percent), textile (39.5 percent), and electronics, computers and optical products (5.6 percent).

In the last three months of the year, HCMC needs 57,000 workers for businesses like restaurants, hotels, textiles, and leather and footwear, a study done by the city’s Center for Human Resources Forecasting and Labor Market Information found.