Bau Bang District has been concentrating its resources on developing a synchronous and modern transport infrastructure to open up opportunities for goods and trade connection among regions, facilitating socio-economic development in the district.

In recent years, along with the attention and investment of the province, the district has developed its transportation network. At present, many important transportation projects are completed and put into use, making important contributions to local socio-economic development. 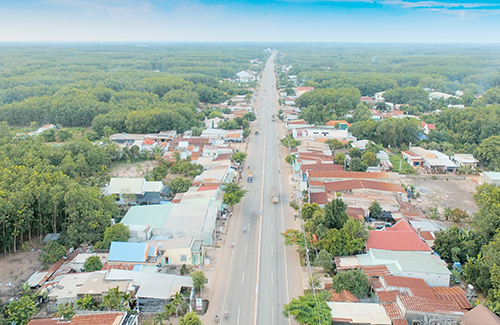 Highway 13 – the artery of the province – the section through Bau Bang district plays an important role in local socio-economic development.

Currently, the district has a section of Highway 13 passing through with level-one scale and six lanes. This is the backbone road of the province, connecting industrial parks, southern urban areas with industrial parks, urban areas and material areas, and northern rural areas in the province. In addition, this is also a smooth transport route linking Hoa Lu border gate through Binh Phuoc and Binh Duong provinces and ending in Ho Chi Minh City.

In addition, sections of provincial roads, such as DT741, DT741B, DT749A, DT749C, DT750 also pass through Bau Bang district, together with the district asphalted and concreted road system, creating favorable conditions for production and communication. trade between localities, people in the district, as well as synchronously connecting with districts, towns and city in the province. Apart from the development of provincial and district roads, the district and its localities also focused on communal roads and rural roads with the motto “The State and people do it together”.

Notably, the district invested over VND 7,300 billion in new rural construction. As a result, up to now the district asphalted road system has a total length of 80.48 km ; 434.82km of communal roads were asphalted and concreted, accounting for 44.53%, and hundreds kilometers of specialized roads in industrial parks and urban areas.

The transportation network in the district area is currently quite reasonably distributed, from the system of provincial roads, district roads to rural roads… creating good connections; at the same time, it is liked to traffic networks of neighboring districts and provinces. Important roads and constructions in the area were proposed by the district authorities to receive fund for upgrading, renovating and opening new ones. The roads connecting communes to the district, bridges and roads have connected trade throughout the district, creating a foundation for the district’s socio-economic development.

To create motivation for development

One of the reasons for the success in attracting investment is the flexibility of local leaders in administrative reform and facilitation of infrastructure development. The district has an advantage that security and order is always guaranteed, strengthening belief of investors.

It can be seen that, in order to meet the requirements of socio-economic growth, investment attraction, and economic restructuring according to the set orientations, the investment in construction, upgrading and expansion of infrastructure scheme, especially the arterial transportation works for industrial development of the district, is an essential demand. The district has been and will plan and invest in outbound transportation networks in a synchronous manner to connect smoothly between industrial zones and economic centers of the province with other provinces and cities in the region, traffic hubs for roads, waterways and railways in the region.

In addition, the district continues to invest in synchronous roads of 2 to 8 lanes, thereby creating favorable conditions for the transport of goods between regions in the province. Particularly, Bau Bang Industrial Park – Urban Zone continues to be invested in transport infrastructure system, contributing to urban renovation and modernization of the district’s urban face.

Besides, 100% rural transport infrastructure will be asphalted and concreted, connecting smoothly from national highways, provincial roads, district roads to hamlets, contributing to the successful implementation of the new rural construction. To create a breakthrough in agriculture, farmers and rural areas; step by step develop according to the planning, have modern infrastructure, have a green, clean and beautiful living environment. The main objective is to shorten the gap between urban and rural areas, build a modern rural face in order to improve the material and spiritual life of people.