At the gateway to the northern economic region

At the gateway to the northern economic region

“Building Hai Phong and Quang Ninh into a center for marine economy and a gateway and momentum for the development of the northern key economic region in association with Lach Huyen international port; developing Quang Ninh into a national tourism center linked with major world and regional tourism centers.” These are the principal contents of the Party Central Committee’s Resolution on the strategy for sustainable development of Vietnam’s marine economy up through 2030 in regards to the northern sea and coastal area, which have been being implemented in the concerned provinces.
To implement this resolution, which was issued in October 2018, Quang Ninh province has diversified forms of investment to attract all economic sectors, especially the private sector. The province has so far invested a total of over 30 trillion dong (over 1.3 billion US dollars) in its transport infrastructure development, including nearly 10.2 trillion dong (over 443 million US dollars) from the state budget and over 19.8 trillion (over 860 million US dollars) dong from social resources.

The Ha Long-Van Don expressway connects the economic development triangle of Hanoi, Hai Phong and Quang Ninh to boost links for development of the northern key economic region. It is also an important infrastructure project which gives new development momentum for the Van Don economic zone. 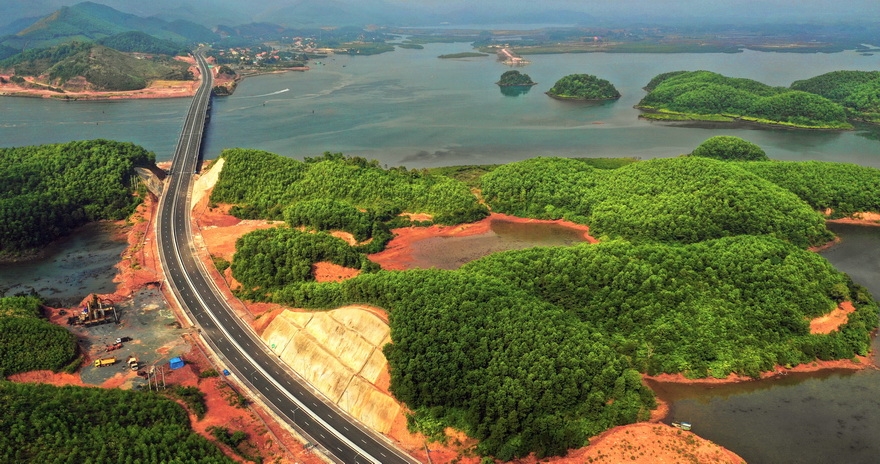 Van Don international airport is the first airport in the country built in the form of BOT (Build-Operate-Transfer). It is not only Quang Ninh’s “gateway to the sky” but also the first private-invested airport project of the transport sector, which has opened a new stage of airport development in the country.

Hon Gai international port, the first specialized cruise port in Vietnam, is capable of receiving state-of-the-art cruise ships. It can handle two cruise ships at a time, each with a capacity of 225,000 GT and capable of carrying 6,500 passengers. With the operation of the port, cruise ships can now dock ashore, instead of having to anchor offshore and use tender boats to take passengers ashore as previously.

Hai Phong’s Lach Huyen port was built in 2013 with a total cost of 1 billion US dollars. After the first phase of construction was completed in May 2018, the port has a handling capacity of about 300,000 twenty-foot-equivalent units (TEUs), to be increased to 2-3 million TEUs in 2019.

Combined with other operating ports, Hai Phong will be able to handle around 5 million TEUs, almost equal to the capacity of ports in Ho Chi Minh City which handled 5.94 million TEUs in 2018.

Other infrastructure projects are also being implemented to serve the port project in Hai Phong, including a new expressway which helps cut in half the travel time from Hanoi to Hai Phong to 90 minutes, and an expressway from Hai Phong to Quang Ninh which will open this year.